Rituals and Traditions in Pakistani Marriages 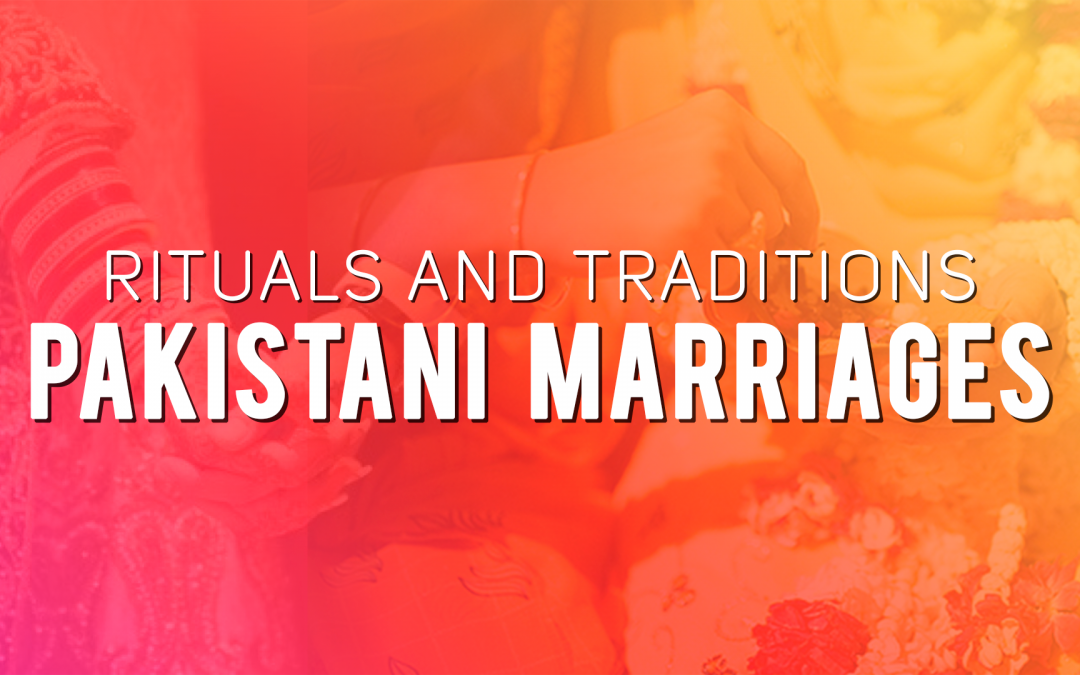 Marriage is a social as well as a religious ceremony. This is a ceremony denoting happiness in every culture or religion.  As a boy or a girl reaches a marriageable age, they are ready to step into the practical life with all the valor and strength with each other’s support. Life is full of challenges so why not face them with positivity and excitement.

Although the procedure of Matrimonial in Pakistan is the same all over the country, different people have their own ways of performing rituals in a marriage ceremony. For some, marriages should be celebrated in a short and crisp manner where time and money could be saved. People who followed the old custom of celebrating the marriage in two days, i.e., the function of Barat and Walima are coming to reduce it to only one; performing the nikah at masjid and pooling in money for the only bigger function. Some more religious people would want to make it even easier on the girls’ side by making the nikah or barat function smaller and the walima reception bigger.
Another stratum of society thinks that the marriage ceremony should be celebrated to its fullest, claiming it’s a day that comes only once in a lifetime. For them celebrations start weeks before by conducting smaller functions at home and preparing for the big day. More affordable parties can spend more, especially on clothes and other accessories.r.

Another stratum of society thinks that the marriage ceremony should be celebrated to its fullest, claiming it’s a day that comes only once in a lifetime. For them celebrations start weeks before by conducting smaller functions at home and preparing for the big day. More affordable parties can spend more, especially on clothes and other accessories.

There is no harm in celebrating a marriage and even performing harmless rituals. In Islam also, its preferred that the word of marriage be spread. The red line comes when balance is destroyed, both regarding expenditures or in the performance of rituals. When extravagance in rituals and spending cross limits, it seems more of a show off and less of a marriage ceremony where praise is needed for all that is spent. So, things are shown and expenditures shared with guests and relatives.

These kinds of expenditures can also become difficult for some white collared people who are surrounded by a chain of traditions and have to observe these only to satisfy the society and relatives, and meet the finances in every possible way. There are others who by nature are simple and do not like show off and extravagance. When such people are forced to follow and “enjoy” these kinds of traditions they don’t feel comfortable. If things start to be decided with mutual agreements it can become easy and strengthen the bond between both the families even more.

While the above-mentioned traditions are in terms of rituals performed in celebrating a marriage, there are some others benefiting one party while burdening the other. If we take a look at the prevalent traditions, they are mostly demanding financial burdens from the girl’s side. For example, giving gifts to the groom’s whole family or taking breakfast for them after walima to name a few of them. This series of gifts begins when one get rishta and it continues throughout life. This seems fun for one side and a burden for the other. As people with well-off backgrounds only see it as a way of further extending the enjoyment days but for some others, especially for white collared ones, who already gave their life to them, in the form of their daughter, these kinds of things might not bring that much of a fun activity.

To crown this, comes the much-debated dowry tradition. While discouraged verbally by everyone, few have shown the courage to say no to it. In the present time with growing awareness people have understood it to be un-Islamic and unethical, we still have quite a majority of people who want it as their right and wait for it for years. Let me add here that we have a third type of people as well, who say no to dowry but want the girls party to force it on them. They don’t want to be criticized for taking it but still want to get all the financial benefits coming with it. If they don’t succeed, they won’t leave the girl alone taking out new ways of demands or even making the girl suffer by not properly sufficing her financial needs. We can take a step towards changing the celebrations where they can be fun for everyone and leave old practiced traditions, serving only half a party’s benefits.

Before partition, Hindus and Muslims lived together. This is why we have so many things in our marriage customs that come from them and are practiced.  Moreover, Pakistani rishta events, we have learnt a lot about extravagance in marriages from Bollywood movies which have nothing to do with real life. Some more recent fashionistas, getting inspiration from the west, have also started bringing some of their rituals and want everyone to participate, ignoring the fact that not all their guests will be comfortable; some could have a conservative background while another could have an introverted nature. All this amalgam of rituals also brings an undercurrent of dissatisfaction regarding one’s own identity.

A strength of a nation is truly maintained when their own base is strong. While some religions like Hinduism, stand on these traditions, Islam stays different especially in following something blindly just for sake of fun. And offers a rich culture that a nation could stand on and be strong and confident about.