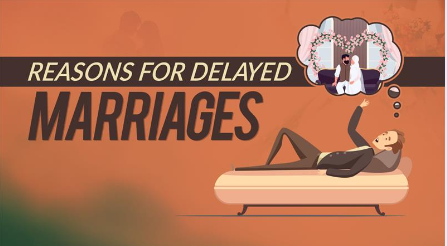 Marriage is blessing if happens at right time but it becomes curse if not done at suitable age or with in correct match. Timely marriage plays a vital role in terms of physical & mental health of individuals.

A famous French saying “les marriages se font au ciel” which means “marriages are made in heaven” can be elaborated as in between couples there is spiritual connection along with love and time is major factor in matching this chemistry.

Some of the causes of late marriages are self-induced while a few others are society induced. One of the major causes of delayed marriage is lack of timely decision making, losing the available options and looking for best option which fulfils all the demands but everything must be considered to ensure that you are not embarking on a journey that you would later regret.

Academic ambitions and desired features like fairness, height, small family, living standards, looking face value not the spirituality, behavior and level of understanding, preferring personal likes, etc. are the main reasons of delayed marriage due to physical cause. Many parents impose conditions that until their daughter completes the professional degree, become doctor or completes her house job they will not think on marriage. The major reason why a lot of individuals decide to marry late is to help them finish from the higher institutions and attain their career objectives. Although they are interested in marriage, they want to get themselves established first financially before entering into marriage.

Many women suffer from delayed marriage because during their early stage of marriageable life, they have many suitors lining up for them. They keep turning every one of them down waiting for the Mr. Right. They forget that the beauty of a woman fades over time. Thus, they end up not marrying till the later part of their lives. Then the time comes when they have to advertise for zarorat rishta. Most times, these women are just eager to do everything possible at later stage to get a match. They may even opt to sponsor their marriage ceremony and wedding and fell into wrong hands.

Most men have delayed marriage due to exorbitant dowry prizes; families wish list is too long to achieve. Many men who cannot afford to pay the dowry prize plus other expenses defer marriage. They wait for such a time they would be buoyant enough to shoulder the responsibilities.

Other group of men just put off marrying till later date because they want to show that they belong. Sometimes the excitement and pressure from family and friends make them to desire showy wedding. When the fund is not yet available, the last alternative is to keep postponing getting married to the detriment of their marital life.

These days things are gone really very hard and commercialize. The economy is biting as hard as possible.  The responsibilities that come with marriage are enormous.  Unless a man is gainfully employed and buoyant enough, he’d postpone marrying till a later date. Even People contacting the institutions of Matrimonial in Pakistan insist that the girl should belongs to the upper class or must be job oriented, so that she too can work abroad and improve the family’s financial situation along with her husband.

One of the reasons is to settle abroad due to adverse living standards and facilities available in under developed countries so moving abroad and settlement take 3 to 5 years of time span which causes delay in marriage. Parents or families’ objectives are linked to settle abroad and then announce the marriage.

Late marriage has its own benefits; it gives more time to judge your better half, provides more financial security, reduces divorce rate and gives freedom. However, late marriage means lateness in enjoying the benefits of marriage. This can cause depression, loneliness, tendency of infertility and reduction of population and stigmatization. There is need provide teaching on the advantages of good interpersonal relationship to both boy and girl, to improve on the teaching on marriage and make it more frequent, educate the youths about importance of singleness and how to handle it. Likewise, the singles need to see their singleness as a gift from God. Both married and single are gifts from God. One is not morally better than the other, and both are valuable to accomplishing God’s purpose. Sometimes, it is better to marry late than to rush into marriage without adequate preparation.