Impacts of Urbanization on marriages 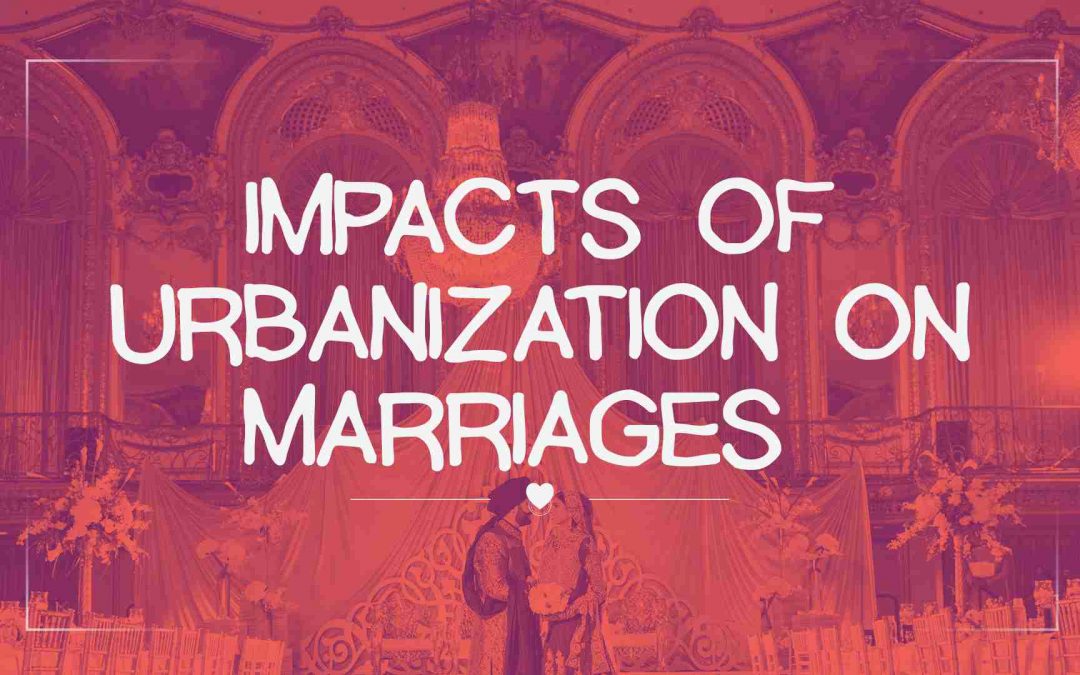 It is now widely acknowledged that urbanization is as much a social, economic and regional process. People migrate to urban areas for better living standard, to avail certain facilities, accessibility of various products and services with respect to developed infrastructure and other leisure of life.  It converts the role of the family too, demographic structures, the nature of work, and the way we choose to live and with whom. It also modifies roles and relations within the family, and re-defines concepts of individual and social responsibility.

Pakistan has the highest rate of urbanization in South Asia. According to the 2017 Population Census, 36.4 percent of the population lives in urban areas.

This trend provides opportunity to marriage bureaus to function as a bridge between rural and urban standard, make and update the thought process of people and work for a good cause for a society. People who migrate to urban areas are always dependent on trust worthy source to find suitable matches for their loved ones. In this contest online Rishta websites may play a wide role in understanding the requirements of a family and offering their best possible services to people who are new to the community.

The shift from rural to urban alters rates of population increase. The time lag between declining death and birth rates initially means rapid urban population growth; subsequently, fertility rates drop sharply and the rate of growth of urban populations declines. As a result, the families become smaller, not only because parents have fewer children on average, but also because the extended family of rural settings is much less common in urban areas. That’s why most of the families face problems in finding a suitable match for their children.

One factor of having less children in urban area is cost of living and life styles in urban settlements than in rural areas and are more expensive to house and feed. In urban settings people are less connected to each other due to their busy life schedules, marriage gatherings are limited to certain numbers of people as compared to rural areas.

The development of an urban society is also linked with a decline in the volume of the family, and ultimately give rise to the formation of non-traditional family norms and new types of households. This trend is in part a reflection of an increasing diversity in “choices of living arrangements.” Those combinations may follow from marriage, the traditional arrangement, or from any other association of individuals within the housing system whether those individuals are related by marriage or blood. Living arrangements in rural areas are homogeneous or traditional as compared to the literature urban society.

In cities the average household size is always lesser and it reflects a sign of success with improvements in housing and ability to afford better lifestyle, but it also reflects dramatic changes in how we choose to live and in our attitudes to marriage, family life, and social responsibility. The change in living arrangements and family composition in urban societies is also closely linked to shifts in work styles. Urbanization involves obvious changes in employment and working life, it alters the relationships between households. Individuals work and earn wages and are free to spend the way they like but mostly it is households and families that spend those earnings. So, the arrangement of families and households influences the living standards as much as the occupational status of its members.

People prefer to move in urban areas mostly because of educational amenities, employment opportunities, medical facilities and modernization but on the other hand uncontrolled growth of many cities has resulted in inadequate public services and a failure to guarantee a minimum quality of life for all urban residents. The current speed of urbanization in developing countries makes urban governance and adequate planning increasingly urgent. As cities grow, inequality is likely to increase unless we implement policies to address it.

While there is no one-size-fits-all solution to reducing urban inequality, present Government has been able to address the economic and social aspects of the urban divide and promote inclusive urbanization, including in rapidly growing cities. In this contest the priority is always given to settle in cities and there is a trend to make a second home in cities specially for better education of children and other standard facilities.

Simple Rishta is a trust worthy source of matrimonial in Pakistan and abroad, building new relations at affordable cost. We aim to redefine the approach of people and help them to find a match according to their requirements.